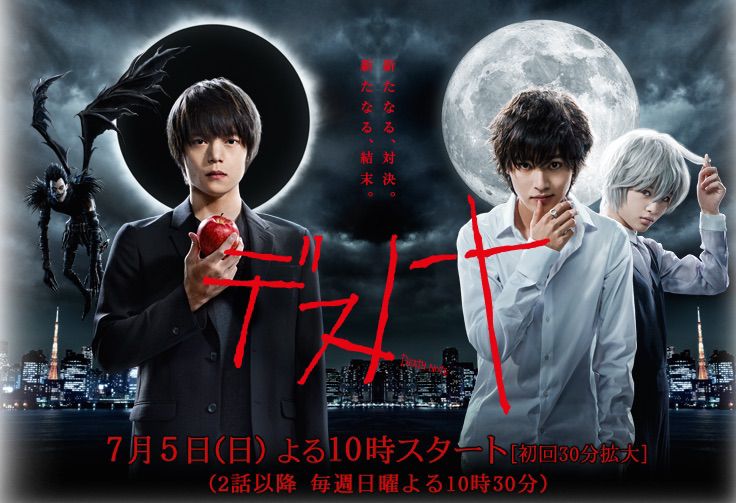 It’s hard to believe it’s already been nearly 10 years since the first Death Note live action film was released (and a cruel reminder of how old I’m getting (´；ω；｀)), but the Death Note fan base is still alive and well after all these years. The new Death Note live action drama, which started airing on July 5th of this year, sports a new cast, new story developments, and breathes new life into the franchise as a whole.

The story is an alternative rendition of the original Death Note. Light Yagami (played by Masataka Kubota ) is a college student who works a part time job. One evening, he and a classmate are harrassed by a thug who they both have gone to school with in the past. He proceeds to steal Light’s cell phone, as well as taunt him with a knife. As Light makes his way home, frustrated and feeling defeated, he stumbles upon the Death Note. From there, his journey toward becoming the “God of the new world” , Kira, begins. Many people who have watched the Death Note anime and the 2006 movies will find many differences in terms of both character personalities, and story development, such as Light’s mother having passed away. Many characters who appeared much later in the original series , such as Misa Amane (played by Hinako Sano) and N (played by Mio Yuki), will appear very early on (within the first 2 episodes, actually). This is most likely for the sake of showing the development of character’s relationships throughout the drama – something I felt was not very well done in the original story, and I personally am looking forward to seeing these characters develop.

Fear not, veteran Death Note fans: This drama was not made to overshadow the original story. Along with this simply being an alternate take on Death Note, the relatability with the key characters is far better than the original. Light Yagami was, in addition to being down right cold blooded, a perfectionist (if not just down right perfect) in the original story. From his looks to his intelligence; he had it all. Light Yagami in the 2015 adaptation comes across as far more “human”, and relatable for most. He is insecure, has normal human faults, and is less quick/willing to kill people using the Death Note. Of course we can’t forget everyones favorite secretive detective – L (played by Kento Yamazaki) has also given the original L role quite a spin. L actually able to stand up-right and walk around (anyone who’s watched or read the original Death Note would understand how much of a BIG DEAL this is…) , and he is far more crued and vein. He wears only button up shirts, and switches into a freshly ironed one whenever he can. The 2 rivals seem more like opposites in this adaptation than in the original, and so far I am liking the way the story is developing.

While only 3 episodes have been released thus far, Death Note 2015 is a drama worthy of it’s name, and is an intense and mystifying experience for both old fans of the franchise, and new comers alike.