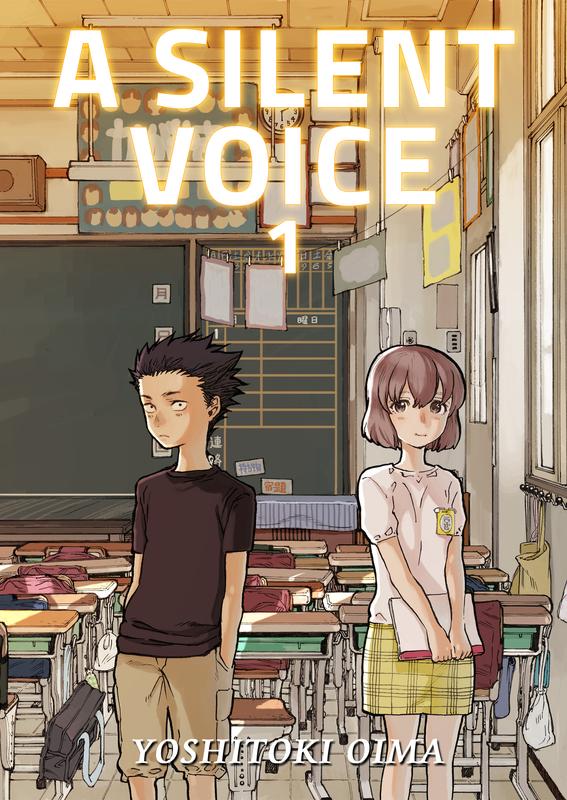 Shoya Ishida isn’t a fan of boredom. His daily activities involve jumping off bridges and getting into fights with older men. He fights not for some lofty goal but because he is bored. What starts out as an innocent endeavor eventually leads to Shoya’s realization that he must grow up. However he ignores his friend’s warning to mature and declares that life is a war against boredom. Koe no Kitachi or A silent voice in the U.S release is a manga written by Yoshitoki Oima that is an emotional read that explores the motives and impact of childhood bullying through its two main characters Shoyo Ishida and Shoko Nishimiya.

The manga originally started as a one-shot and was later expanded into seven separate volumes. The reader will not need to read the one-shot before they start this manga. The one-shot is included in this manga and have been expanded to fit a full volume. Currently there are two volumes released in the U.S. While this may seem little in comparision to other manga, each volume feels like a separate story on its own. It reads more like a series of novel rather than a weekly serialization. This story is by no mean slow, but don’t expect there to be excitement every 10 page or so.

The plain character design shows how Shoyo views people as simply a way to relieve his boredom. From jumping off bridges with his friends to getting into fights and bullying Nishimiya, all of Shoya’s reasons for his actions were simply because he was bored. Another noticable thing about the art direction of this manga was how subtle the author kept the story. Shoya began as a mischievous punk who only did stupid things to entertain himself but ends up being shun by his close friends. The bruises and marks on Shoya were a minor addition to his character throughout the pages. The mangaka never explicitly shows Shoya being beaten by his friends until later in the manga. This illustrates how bullying can start off as minor incidents and then escalates into major ones.

A silent voice is an easy read but its subject matter can leave readers uncomfortable with the realities of bullying. For readers that are looking for escapism and delightful humor within their manga, look elsewhere. A silent voice tackles on the subject of bullying head on, similar to Shoya’s attitude on boredom. It is a refreshing read amongst the sea of battle fantasy manga and gag manga. But rest assure a silent voice’s story is a good story even with a tough subject matter such as bullying.

It’s hard not to recommend this manga. Even if you are not a fan of school settings in manga and anime, a silent voice destroys the anime shool cliché and fills it with reminders of how difficult it is to grow up. Especially if you grew up different amongst your peers. The first volume can be read as a one-shot so in theory you could read the first volume and be done with the series. But I’m curious about what the author has packed for the next 6 volumes. Of course I’ll be picking up the remaining volumes, it’s just a matter of waiting for the U.S release to come out. Koe no Kitachi can be previewed on crunchyroll for free, give it a try if you’re still on the fence about this series.